So, I have two questions:

To answer these questions, I simply made a graph using the same inflation forecast error data as before, but arranged in terms of quarters before a US presidential election (quarters with elections are coded 0). I then coloured the inflation errors by the sitting president's party. Finally, I used R's ggplot2 loess function to summarise and compare the errors made during Democratic and Republican presidencies. 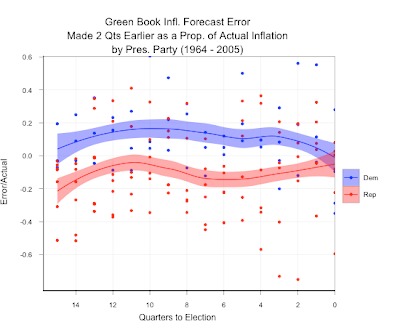 Question 2: It is not as clear that forecasts systematically differ in election periods as opposed to non-election periods. Though the spread of the errors across parties does shrink very close to the election. I wonder why this might be?

The R code to reproduce the plot is:

Pet food processing often organize various seminars and fairs to promote their pet foods. At these fairs, they display their products and attract the attention of the general public.
09:23