Research is an unpredictable thing. You head in one direction, but end up going another. Here is a recent example:

A co-author and I had an idea for a paper. It's a long story, but basically we wanted to compare banks in the US to those in the EU. This was a situation where our desire to explore a theory was egged on by, what we believed, was available data. In the US it's easy to gather data on banks because the regulators have a nice website where they release the filings banks send them. The data is in a really good format for statistical analysis. US done. We thought our next move would be to quickly gather similar data for EU banks and we would be on our way.

First we contacted the UK's Financial Conduct Authority. Surprisingly, they told us that not only did they not release this data, but it was actually illegal for them to do so. Pretty frustrating. Answers to one question stymied by a lack of data. Argh. I guess we'll just keep looking to see what kind of sample of European countries we can come up with and hope it doesn't lead to ridiculous sampling bias.

We eventually found that only 11 EU countries (out of 28) release any such data and it is in a hodgepodge of different formats making it very difficult to compare across countries. This is remarkable when compared to the US and kind of astounded me given my open data priors. We then looked at EU level initiatives to increase supervisory transparency. The European Banking Authority has made a number of attempts to increase transparency. For example, it asks Member States to submit some basic aggregate level data about their banking systems. It makes this data available on its website.

Countries have a lot of reporting flexibility. They can even choose to label specific items as non-material, non-applicable, or even confidential. Remarkably, a fair number of countries don't even do this. They just report nothing, as we can see here: 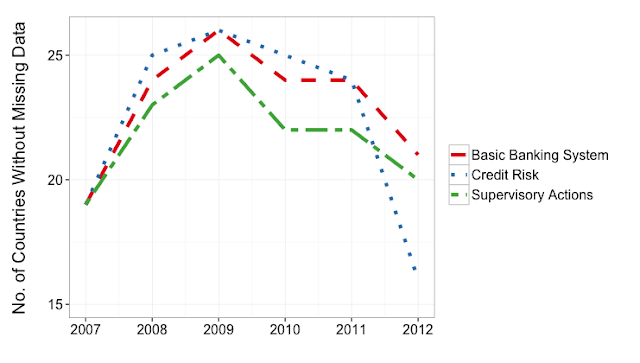 Though almost all Member States reported data during the height of the crisis (2009) this is an aberration. In fact a lot of countries just don't report anything.

What are the implications of this secrecy we asked? We decided to do more research to find out. We published the first outcome of this project here. Have a look if you're interested, but that isn't the point of this blog post. The point is that we set off to research one thing, but ended up stumbling upon another problem that was worthy of investigation.

This post's title is clearly a bit facetious. But the general point is serious. We need to be flexible enough and curious enough to be able to answer the questions we didn't even know to ask before we go looking.