Update 31 July 2013: I've moved all of the functionality described in this post into an R package called simPH. Have a look. It is much easier to use.

This is a quick update for a previous post on Graphing Non-Proportional Hazards in R.

In the previous post I showed how to simulate and graph 1,000 non-proportional hazard ratios at roughly every point in time across an observation period. In the previous example I kept in simulation outliers. Some people have suggested dropping the top and bottom 2.5 percent of simulated values (i.e. keeping the middle 95 percent).

Luckily this can be accomplished with Hadley Wickham's plyr package and three lines of code. The trick is to use plyr's ddply command to subset the data frame at each point in Time where we simulated values. In the previous example the simulated values were in a variable called HRqmv. In each subset we use the quantile command from base R to create logical variables indicating if a simulation of HRqmv is greater than the 0.975 or less than the 0.025 quantile. Then we simply subset the data frame.

Here's how you do it: after all of the values have been simulated and the data set ordered and right before graphing the results add this code:

Adding this code to the previous example creates this graph: 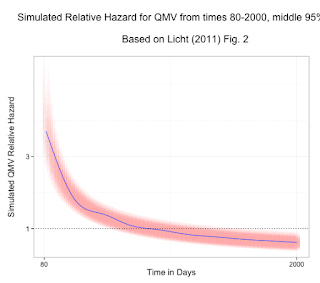 Here is the full code to replicate the example:

May 21, 2013
I often want to quickly create a lag or lead variable in an R data frame. Sometimes I also want to create the lag or lead variable for different groups in a data frame, for example, if I want to lag GDP for each country in a data frame.I've found the various R methods for doing this hard to remember and usually need to look at old blogposts. Any time we find ourselves using the same series of codes over and over, it's probably time to put them into a function. So, I added a new command–slide–to the DataCombine R package (v0.1.5).Building on the shift function TszKin Julian posted on his blog, slide allows you to slide a variable up by any time unit to create a lead or down to create a lag. It returns the lag/lead variable to a new column in your data frame. It works with both data that has one observed unit and with time-series cross-sectional data.Note: your data needs to be in ascending time order with equally spaced time increments. For example 1995, 1996, 1997. ExamplesNot…
28 comments
Read more

May 08, 2015
Carson Sievert and Kenny Shirley have put together the really nice LDAvis R package. It provides a Shiny-based interactive interface for exploring the output from Latent Dirichlet Allocation topic models. If you've never used it, I highly recommend checking out their XKCD example (this paper also has some nice background).LDAvis doesn't fit topic models, it just visualises the output. As such it is agnostic about what package you use to fit your LDA topic model. They have a useful example of how to use output from the lda package.I wanted to use LDAvis with output from the topicmodels package. It works really nicely with texts preprocessed using the tm package. The trick is extracting the information LDAvis requires from the model and placing it into a specifically structured JSON formatted object.To make the conversion from topicmodels output to LDAvis JSON input easier, I created a linking function called topicmodels_json_ldavis. The full function is below. To use it follow …
24 comments
Read more

April 11, 2013
I'm always looking for ways to download data from the internet into R. Though I prefer to host and access plain-text data sets (CSV is my personal favourite) from GitHub (see my short paper on the topic) sometimes it's convenient to get data stored on Dropbox. There has been a change in the way Dropbox URLs work and I just added some functionality to the repmis R package. So I though that I'ld write a quick post on how to directly download data from Dropbox into R. The download method is different depending on whether or not your plain-text data is in a Dropbox Public folder or not.Dropbox Public FolderDropbox is trying to do away with its public folders. New users need to actively create a Public folder. Regardless, sometimes you may want to download data from one. It used to be that files in Public folders were accessible through non-secure (http) URLs. It's easy to download these into R, just use the read.table command, where the URL is the file name. Dropbox recent…
9 comments
Read more