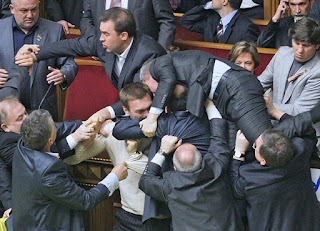 If you've ever wondered why physical fights sometimes break out between legislators, like the one in the above picture from the Ukrainian parliament, you might be interested in a working paper that I just put together. The working paper is called:

The title refers to the rumor that in the UK House of Commons the government and opposition benches are two sword lengths apart to prevent actual duels.

You can find a PDF version of the paper here.

My main findings are that new democracies and unfair legislatures are more likely to have violence. Legislative unfairness means that the allocation of seats is disproportional and a smaller proportion of legislators are part of the governing majority.

In new democracies losers many not have developed a reasonable expectation that they can become winners some day.

Unfair legislatures both increase the proportion of legislators that are losers as well as heightening their sense of loss. For example, if your party wins 30% of the vote but only 20% of the seats and that 10% means the difference between being in government or out, you might be rather irritated and maybe more likely to attack governing party legislators who try to pass a piece of legislative you really dislike.

Here is a summary table from the working paper of my framework and some illustrative examples. 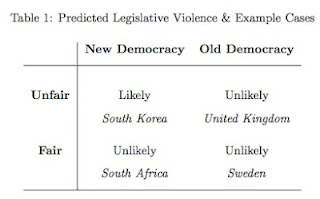 I have some interesting graphs in the paper and plan to discuss how I made them in future posts.