Michael Gallagher keeps an updated version of his Least Squares (or Gallagher) Index of electoral disproportionality on his website, however it is in PDF format; very inconvenient for using in any stats project.

John Carey & Simon Hix have some nice data--that includes much of Gallagher's data and some countries he doesn't cover--in easy to use Stata format (here). This is the data from their recent Electoral Sweet Spot paper (see here). However it only goes to 2003.

I combined the best of these two data sets into one .csv file and am making it available so that hopefully others can use their research time for better things than copying and pasting data from a PDF file. You can easily import this data into R or Stata or whatever you may use.

The data set is downloadable HERE. More details on how I combined the data can be found there as well.

I couldn't stop myself from making a few descriptive figures with the data. The first is a map of average disproportionality between 2000 and 2011. The second plots disproportionality over time (you can see there hasn't been much change).


Gallagher Electoral Disproportionality Averaged Over Elections from 2000 through 2011 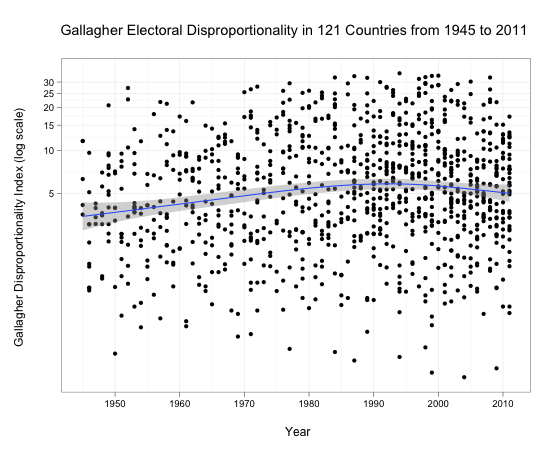 As always, the R code: