August 28, 2011
This graph from The Atlantic's Daniel Indiviglio is pretty astounding (click to enlarge). 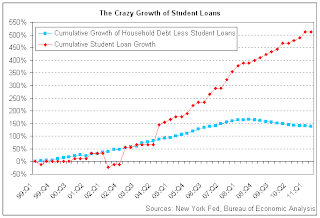 A good deal has already been written about it. Particularly the fact that the growth in student debt exceeded the growth in other debt during what is now know to have been a massive housing bubble. I don't want to double up on too much of what others have written, but I had some thoughts.

The graph (and the article) (and current students) make a compelling case that we are in a student loan bubble. So, it might be sensible given the obviously high cost of the previous bubble to begin to at least draw down the growth in student debt. This likely means some combination of (a) reducing government support for student loans (removing guarantees, tightening lending standards, etc.), (b) providing grants to students, (c) instituting some sort of price controls on universities (tuition caps). All three of these measures are politically difficult:

Reducing Loan Support: Much of the increase in the cost of higher education and student debt can likely be attributed to government programs that allow students (especially grad student and undergrads' parents) to take out virtually unlimited loans. Removing support for this type of lending would decrease student's ability to pay high tuition. Hopefully, universities would have to respond by lowering fees. However, this has distributional consequences, especially in the short-term. Middle and lower income students will effectively be locked out of many universities. This will clearly be politically unpopular since university has become one of the few ways to try to ensure a stable and moderately high income.

Providing Grants: Given most state and federal budget realities, changing loans to grants would effectively be changing student debt to public debt. There is clearly little appetite for this right now.

However, it should be noted that if the student bubble bursts, like the housing bubble, explicit or implicit contingent liabilities have a way of hitting the budget directly anyways.

Tuition Caps: There are numerous political problems. Imagine any US politician these days advocating price controls. Furthermore, there would be difficulties getting universities to go along with such measures since they are the direct beneficiaries of tuition inflation.

(For my UK readers, the current government used a couple of these strategies when they raised university fees. Though we can discuss what you think about higher tuition fees in the UK, it is clear that the growth in UK student debt isn't going to grow at the same continuously massive rate as in the US.)

I'm not sure how this is going to turn out, but I do have one further thought as a budding academic. Though universities (including faculty) clearly benefit from a system that is rapidly allocating considerable resources to it, they have a long-term interest in taming this bubble. The clear analogy is the housing industry.

Sure when the bubble is building things are great. But when it crashes and crashes in such a way that demand sinks for a long time, the former winners become losers.

PinskVinsk said…
Interesting. I think this article from the Guardian makes a good point about another entity (besides banks/governments) getting in on the higher-education feeding frenzy: